I'm a New Englander who enjoys writing, sewing and taking photographs. I named this blog "apple cyder" because my husband's family used to own a wonderful cyder mill and my husband still occasionally presses small patches of cyder for our family. It really has nothing to do with my favorite hobby -sewing- but so it goes! Thanks for stopping by.

If you'd like to use any of the content from this site, please request permission. You can reach me at acyder {at} gmail {dot} com.

Click here to have your apple cyder delivered by email. 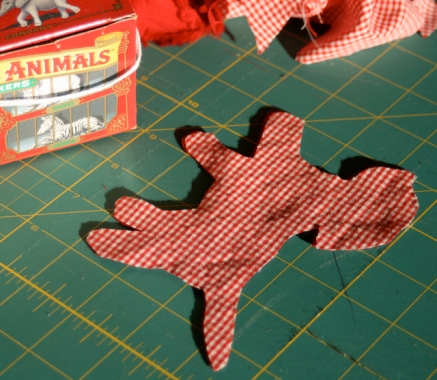 Just sewed up some valentine fun for the little guy and his pals. Four little capes for four of the sweetest little valentine superheros you’ll ever meet. The capes are all wrapped up and ready to go. Hopefully I’ll get a good action shot of some of the superheros to share.

Thanks to all who commented on the great bird quilt debate. In the end, I decided to drop the @#$%!! part. Anna had an excellent point about how sooner or later the Island Baby will be asking for an interpretation of what exactly that pesky upside-down bird is saying. Good sound advice from a mother of two who is currently fielding innocent questions about cursing from one of her little guys.

As a side note, it was a nice surprise to hear from Wolpie Mami, a friend from my days living in Germany who has tons of interesting hobbies. For those not well versed in German folklore, wolpie is short for wolpertinger which is a mythical creature rumored to haunt the woods of Bavaria. Give it a google if you are curious. The photos have to be pretty entertaining.

One thought on “valentines in progress”